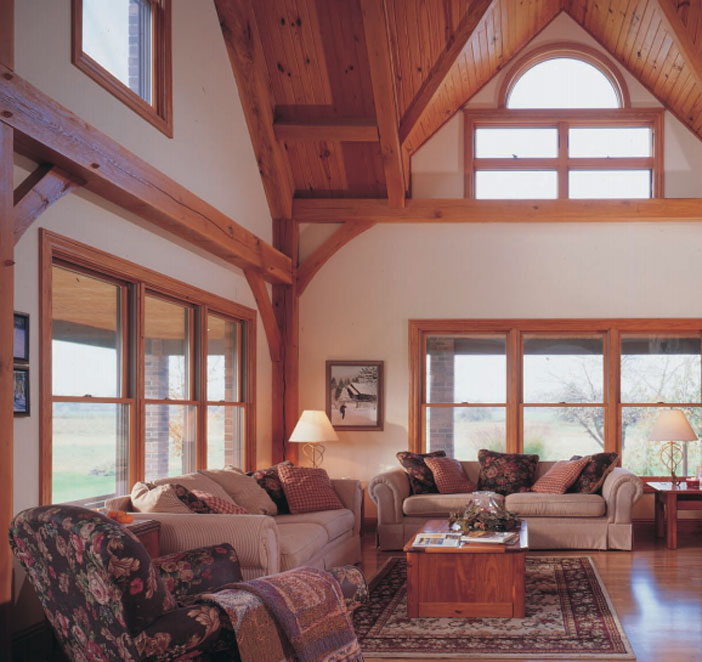 Steve and Kim Pistone found themselves standing on opposite sides of the fence when the time came to decide what type of house to build on their rambling 50-acre Christmas tree farm. Steve had always dreamed of building a log home, and Kim was intrigued by the dramatic look of a timber frame. Enter the art of friendly persuasion.

Armed with her collection of magazine photos, Kim hoped to convince Steve that building a timber frame home was the way to go. And though his heart had always been set on a log home, he admits that the more he looked through the pictures, the more interested he became–enough to take it a step further by contacting builders. It was Oakbridge Timber Framing in Howard, Ohio, who brought timber framing to life by offering to show the couple the real thing. "Once I saw a timber frame home, I was sold. I loved the openness," says Steve.

With their decision made, the Pistones were anxious to build. Amazingly, the pieces just seemed to fall into place. Ordinarily, Oakbridge's production schedule is booked a year in advance, but a cancellation had created an opening. "You could say it was like a small miracle," says Johnny Miller, marketing and sales director for Oakbridge.

Their immediate place on Oakbridge's schedule meant that Kim and Steve had to get to work on a floor-plan design right away. With three growing children, the couple had two main requirements: space and privacy. But it wasn't seclusion from neighbors or an escape from the clamor of heavy traffic they wanted. Steve and Kim wanted a secluded area inside the house for parental peace and quiet. "I wanted our bedroom removed from everyday activity," Steve says.

The design that emerged from this simple request is a 4,300-squarefoot farmhouse-style home with two distinct living areas, one downstairs and one on the second floor. "We came up with a basic floor-plan that we could live with for the rest of our lives," says Steve. An expansive great room that runs the length of the house, four kid friendly bedrooms, two bathrooms, a kitchen, an eating area and the laundry room comprise the 2,400-square-foot first floor. Outside, it is embraced on three sides by a brick-pillared wraparound porch. Views of the woods, the family's 2-acre lake and the tree farm can be seen from nearly every room as well as from the porch.

"We spend a lot of time just looking at the wildlife–we see coyote, geese and deer," says Kim

A flight of stairs leads to the couple's secluded second-floor retreat, which features a 1,500-square-foot all purpose room with its own fireplace, a wet bar, two sitting areas and the master bedroom and bath. Because of the home's steep roof pitch and modified A-frame design, even the second floor's vaulted ceilings reach a soaring 22 feet high. "When I lay here at night reading a book and look up, I feel like I'm in a fairy-tale," Kim says.

Since the Pistones knew exactly what they wanted, the house went quickly from design to raising. From the rough sketches Kim and Steve provided, the Oakbridge team designed the couple's frame. It's very basic, with simple intersecting gables. "There's elegance in the simplicity of this house," according to Johnny. "The main challenges was its size. A large frame requires longer timbers."

It took a five-man crew four days to erect the timber frame skeleton. For Steve and Kim, watching the frame take shape timber by timber turned out to be one of the most exciting and memorable parts of the project. When the frame was assembled, family and friends gathered at the site to participate in the time-honored tradition of nailing a pine bough across the structure's highest peak, symbolizing the life of the trees that comprise the home's frame.

Taking Charge, Inside and Out "Once the frame was up, we were on our own," says Steve, a mechanical contractor by profession, who acted as his own general contractor. For the next six months, he spent every spare moment working on the house, doing everything from attaching the structural insulated panels to installing the flooring. The plumbing presented an unexpected challenge, since the home's open nature meant fewer walls for routing pipes. "I was lucky to find a plumber who had a lot of experience with similar homes," he says

For a house whose interior focal point is its dramatic wood construction, the exterior is conspicuously devoid of wood. Initially, plans called for a brick facade with wood siding. But Steve and Kim wanted a low maintenance house, and wood has to be regularly inspected, stained and maintained. Halfway into the project, they decided to take the plunge and invest in an all brick house. There's virtually no wood to be found anywhere on the exterior– even the eaves are faced in stone. In fact, only the gables that line the roof of the no-nonsense exterior offer a hint of the home's dramatic interior wooden secret.

When people walk into the house, their eyes are immediately drawn up toward the intricate peaks and valleys of the great room's 32-foothigh ceiling. "The angles of the wood are absolutely beautiful," says Kim. The room's centerpiece is the stone fireplace with its simple black walnut mantel milled from a tree that once grew on the Pistones' property.

To contrast the white oak timbers, they chose natural cherry for the kitchen's Shaker-style cabinets. For durability and practicality, they topped the cabinets with a black-and-tan-flecked granite countertop. And to reflect their lifestyle, Kim and Steve incorporated a casual eating area in the great room instead of a separate formal dining room.

A bit of an antique bluff, Kim likes the decorating versatility of her timber frame home. Her approach is eclectic, mixing and matching different styles of furniture and wall treatments that work well together. Because the house is 1,000 feet away from the road, windows coverings and the privacy they afford haven't been an immediate necessity, which is a good thing since they've proved to be a very challenging decorating decision. "At first I was going to put up blinds, then cornices; now we're down to valances with roller shades," she says.

Was it worth all the hard work? Absolutely, say the Pistones. "We still can't believe this is our house. Every days feels like vacation," Kim says. No matter where you look–inside or out–the view is breathtaking. To the front, lush fields gently slope toward wildflowers and to the side and rear, the evergreens provide a curtain of dark green. "I could be in Hawaii and it wouldn't be any better than this," she declares.

Building a timber frame has mixed the abundance of wood Steve wanted from a log home with the elegance and decor versatility Kim desired. For them, the project is more than a fair compromise; it has been the best of both worlds.