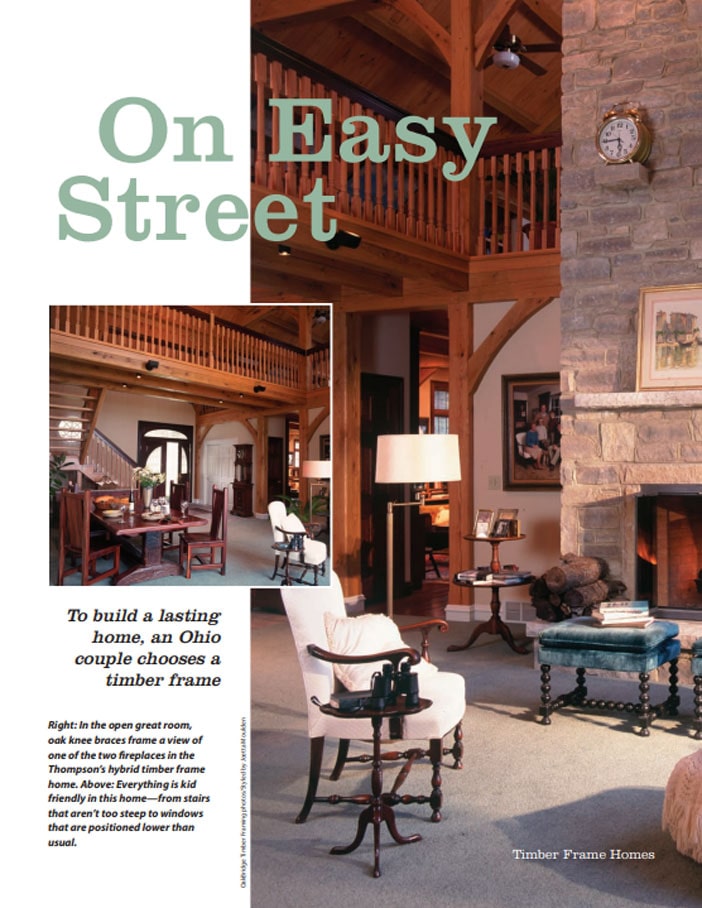 Ask Dick and Judy Thompson how their comfortable timber frame home on Lake Erie near Toledo, Ohio, has changed their lives, and Judy doesn't hesitate with the answer. "We are more relaxed in our lake home," she says.

Part of the relaxation, no doubt, comes from the realization of finally building a lasting home on the gorgeous resort property that has been in their family for more than forty years. "We were living in Columbus, but for 10 years, we had been planning every aspect of this home," Judy says.

During the planning period, the Thompsons thoroughly researched the entire construction process from cost eliminating, design and potential general contractors to what they could do to make their home unique and permanent. As they researched the project, they knew this would be not just their new primary residence but, more importantly, the last residence they would build.

And when they saw a timber frame home, Dick and Judy knew this was the kind of place where they could relax and really enjoy their land. But they had to overcome some initial fears and misconceptions. "Honestly, we weren't familiar with timber frames until we saw them in Timber Frame Homes magazine," Dick says.

The Thompsons quickly came to realize that a timber frame would be a perfect fit for the home they envisioned. And they found an equally perfect fit in OakBridge Timber Framing, a relatively small, Amish-owned company based in Howard, Ohio, that produces about a dozen timber frames a year. "We learned of a neighbor that was using OakBridge, and we were impressed with the quality of their frames," Dick says.

Dick and Judy also were impressed with OakBridge's attention to detail, from the relationships formed to the product they created. "They're a one-horse operation," Dick says. "That made them really enjoyable to work with."

"The Thompsons toured our facilities and liked the way we worked," Oakbridge Owner Johnny Miller says. "We build an intimate relationship with each of our clients—that's OakBridge's main drawing card."

As their name implies, OakBridge manufactures it's timber frames out of local oak. "The oak here is the best in the country," Johnny says of north central Ohio.

Another drawing card for OakBridge's customers is that the company encloses it's frames in energy-efficient structural insulated panels. (See "Signed, Sealed and Delivered," on page 10, for more information on panels.) OakBridge is a dealer for FischerSIPS of Louisville, Kentucky. "It was an unplanned affiliation," Johnny says, "that just made sense."

When it came time to design the Thompson's home, Dick—an engineer—eagerly contributed to the floor-plan, knowing exactly what he wanted in his house. "We decided to build a hybrid home, two-thirds timber frame and one-third conventional construction," Dick says, adding that it took time to get the layout just right. "Every idea for this house was researched from a half-dozen directions.

The result is a house that, despite being home to just Dick and Judy, is the perfect place to welcome grandchildren and never worry about the inevitable spills or messes with such visits. "The house is great for kids," Johnny says. "Everything is kid height: The windows are low, and the stairs are not real steep." In designing the 4,000-squarefoot home, Dick and Judy included a central vacuum unit that operates from the garage. There's an inch-and-a-half pipe that runs throughout the house, each room has plates the size of electrical outlets where you can just plug the hose into, so you don't have to lug a vacuum cleaner around the whole house.

Also, Dick included 2-by-5 inch openings connected to the vacuum system under the counters and cabinets into which dust and dirt can be swept. "You never need a dust pan," Jim says, adding that the Thompson's goal was a house where they wouldn't have to worry about creating messes. "We could just enjoy the lake and the surroundings," he says.

Nowhere is this philosophy more evident than the rec room, an enormous loft area that quickly became the family's favorite place to relax. "People look at that room and just say, 'Wow!' " Judy says of the recreational area that features a pool table, stone fireplace, ceiling fan, cork flooring and a fantastic view of Lake Erie.

"The entire upstairs of the timber frame portion is the recreation room," Johnny says. "It's just huge."

And the rec room isn't the only place where the Thompsons capitalized on their presence of the lake. Judy loves the kitchen, with it's grand arched windows just above the sink. "When I first looked at it, with the windows facing the lake, I said, "I could do dishes here," Judy recalls.

The kitchen also features low-maintenance tile flooring. "You hardly have to clean it at all," Judy says, crediting interior decorator Mary Ann Minnich with many of the home's low maintenance finishing touches. Of course, Dick included a few things for himself in the home's design. He allotted space for a 100-gallon aquarium in the library, which houses more than 400 books and doubles as Dick's office. The room also contains a high-tech sound system. (Dick wired the entire house with speakers to pick up the local weather station so he could stay on top of Lake Erie's ever changing conditions and storm fronts.)

In the great room, the Thompson's incorporated the best features of the house: a second limestone fireplace (28 feet high, floor to ceiling) and plenty of windows to ensure ample sunlight and tremendous views of the lake below.

In fact, Judy says, it's the great room that greets visitors upon their arrival and immediately changes their perceptions of timber frames. "Most people are not familiar with this type of building; they come here and expect a timber frame home to be dark like an old lodge," Judy says. "But they see it and it's not—it's got a wonderful feeling of openness and light."

And that is just what the Thompsons wanted: an open home, suitable for their family's Lake Erie property, showcasing a variety of wood species. "Not only do we have oak from the timber frame, but also cherry cabinetry and flooring," Judy says. "All the woods blend together perfectly. We couldn't be more pleased with the results." For Dick, the home actually exceeds the design he conscientiously envisioned. "Frequently, a home doesn't live up to it's expectations," Dick says, "but in this case, it was even better than out expectations."

With such grand results, it's no wonder the Thompsons find it so easy to relax these days.