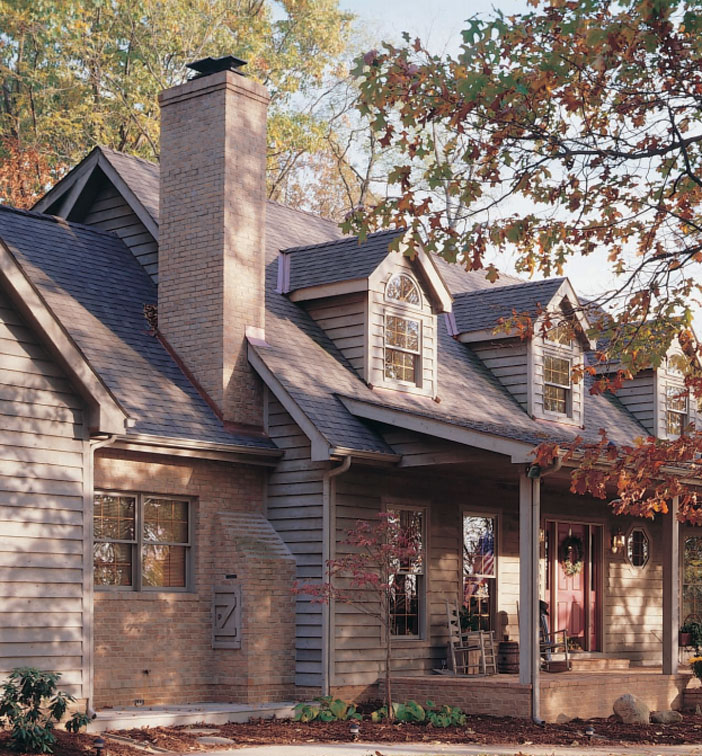 A big appeal of timber framing for Brad and Beth Ann Johnson is the handcrafted shaping and joining of the large timbers. When they built their home in Chillicothe, Ohio, they chose Oakbridge Timber Framing because the Amish-run Howard, Ohio, company uses hand tools exclusively

Another aspect that sold them on Oakbridge revealed itself as they and the company prepared to sign the contract. "We decided to go 28 feet wide instead of 24," Brad remembers. "Oakbridge told us the price would be somewhat higher. Later I remember sitting in owner Johnny Miller's office. He told us they'd made a little mistake in the estimate, and I feared the worst. To my surprise, he told us that he has miscalculated and would be subtracting $186.23. After that, we knew we did the right thing!"

The idea of a timber home had entered the Johnsons' minds about 10 years earlier. "We wanted a Cape Cod-style home with an open floor plan that wasn't too overbearing," says Brad. "We wanted it to be warm, homey, solid and inviting. We wanted something that was a little different."

While dreaming of their timber home over the years, the Johnsons did their homework. They read dozens of magazines and books for information, and went to home shows and talked with people. 'Tedd Benson's books were especially helpful," recalls Brad. "We also cut out many ideas from regular magazines that we could apply to a timber home."

When it came time to do the actual design, the Johnsons turned to Brad's mother, Rowena Perry, an interior designer and owner of a highend home furnishings store called House of Design based in Chillicothe. Brad, Beth Ann and Rowena sat down one night over dinner and started the design on a napkin. The three pooled their resources and came up with a finalized plan that they later brought to the draftsman at Oakbridge.

The design called for a total of 3,364 square feet. The 28-by-40-foot timber-frame portion encompasses 2,158 square feet. A conventional garage and 12-by-20-foot breezeway connector make up the remaining 1,206 square feet. The first floor is an open layout that contains the living room, kitchen, dining area, master suite and a laundry-sewing area. The garage, connector and a covered porch, are also on this level. The upstairs features a family room-sitting area, office, two bedrooms and a bath. The house also has a walkout basement.

After working out the final details with Oakbridge, construction began. The only major snag was that the Johnsons' contractor fell off a ladder while working on another project just three weeks before construction was set to begin. Since he broke both ankles, he was unable to work on the Johnsons' home. Despite this setback, construction went very smoothly. Oakbridge arrived after the foundation was set and erected the oak frame in just a few days, using hickory pegs and oak timbers. "The frame arrived in a zillion pieces, and they only had to make about three cuts with a chisel," says Brad. "They had measured every thing and it all fit so perfectly that you couldn't even slip a piece of paper between the pieces."

After the frame was completed, another group of workers came in and enclosed the home. Brad's friend Ron Newland, a local carpenter, played a big role in building the home. Though they were working full-time jobs, Brad and Ron worked on the house every night until 11. They did much of the work on their own, including the cabinets, trim, flooring, plumbing and electrical work (Brad works in the electrical industry). Brad says that putting in the plumbing and electrical lines in a timber-frame home is challenging because there are only a few places to put them. Beth Ann stained all of the wood in the home including the ceiling paneling.

One of the things that stands out in Brad's mind about the building process is his and Beth Ann's living arrangement. "We lived with my mother in a big house about 15 miles away during construction," he recalls. "The funny thing was that, for one reason or another, all but one of my mom's grown kids were living with her at that time. It was a really fun time."

When the home was complete, Brad and Beth Ann were delighted with the results. "We love the open feeling and the airiness of it," says Brad. "When friends visit, they always say, 'I can't believe this. You live here?' It's very relaxing, it's home. We love coming home."

The outside surroundings offer just as much respite. Set on nine wooded acres in the Scioto River Valley, the home offers close-up views of nature as well as towns in the distance. The majority of the landscaping is left in its natural state. "How God left it is how it is," says Brad. There are more than 100 trees in the front yard, mainly oak, maple and walnut, and a few are over 100 years old. Brad says they provide plenty of shade and lower the temperature around the home by 5 or 6 degrees. The property is also home to squirrel, deer, birds and other wildlife.

The interior decor reflects a Shaker or French Country influence. Almost all of the furniture came from Rowena Perry's shop. In Shaker tradition, many of the pieces feature exposed nails that show how the piece is put together.

Beth Ann and Rowena did all of the decorating themselves. "The beauty of a timber frame is that you can make the decor anything you want it to be," says Brad. "Since we had our timbers planed and finished, we went with the same idea for our furniture. It's not too rustic. Timber homes are kind of a rarity in this part of the country. What's neat is that when you walk up to it, it doesn't look different from other homes from the outside."

Through hard work, family dedication and a sense of practicality, the Johnsons were able to create a home that they will enjoy for years to come. "My philosophy was to spend money on key elements such as the foundation, frame and windows, and save money on things we knew we could replace later on, such as countertops and light fixtures," says Brad. "It's realistic to assume that you're going to spend 30 percent more than you planned. It's a very intense but wonderful experience."

Now that they have lived in their home for seven years the Johnsons can attest to its durability . They are also impressed with the level of energy efficiency provided by the panelized wall systems and high efficiency furnace; one winter, when it was 28 degrees below zero, the home cost only $350 to heat for the entire season. Brad and Beth Ann also love the area where they live. Their home is located just a mile away from Kingston, a small country town that has just "two traffic lights, a gas station and a Chevrolet dealer."

Years after the project, Oakbridge owner Johnny Miller still stops by the Johnsons' house to visit on occasion. One time, he sat down on the porch and asked Brad if he was really satisfied with the home. "I told him I loved it, that I got a Corvette for the price of a Chevette," says Brad, laughing. "It's kind of neat to think that 100 years from now, someone will come across the house and say, 'Wow, some old-timer built this.' It's comforting to think that this house will still be here 200 or 300 years from now."