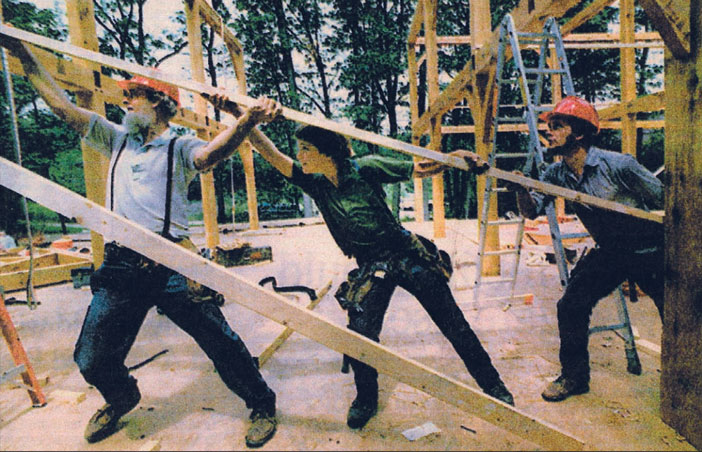 Two worlds were brought together this week in Deer Park through pieces of timber.

Members of an Amish construction family came to the Chicago suburbs to build for a couple their specialty – a timber frame for a house.

"They are probably the most unaffected, kind, warm, honest, religious and just nice people you could meet," said Lori Elo of Palatine.

It took some slabs of timber to bring together two disparate cultures together in Northwest suburban Deer Park.

A crew of Amish laborers – men and boys – came to town this week from their homes in rural Ohio, hired to build a house the Amish way. Philip and Lori Elo thought they couldn't do better than to trust the timber frame of their home to the honest, hard labor of the Anabaptists.

"Being with them all week, you find out unbelievable things about them," said Lori Elo, 32. "They are probably the most unaffected, kind, warm, honest, religious and nicest people you could meet."

"There are other companies," Philip Elo, 31, added. "But from what we've determined here, they're the finest quality."

It was big timbers that brought the two worlds together. The Elos are paying the Amish owners of OakBridge Timber Framing about $50,000 to put up a 5,600-squarefoot frame on 1.5 acres in Deer Park called Hidden Pines. The remainder of the approximately $350,000 house project will be finished by other contractors.

The men were accompanied on their journey to Chicago by their wives and children. All were dressed in traditional simple attire. The men, all bearded, wore suspenders and blue jeans. The women, in their long skirts and bonnets, observed quietly. When it came time for lunch, Lori Elo drove the women into town to buy sandwiches for the men.

A timber frame is made with big beams connecting like a jigsaw puzzle. Wooden pegs are used in place of nails. Externally the homes look like any other, but internally the beams will run rampant and entirely hold up the house.

"They last substantially longer than a stud-build house," said Phillip Elo, a commercial banker by trade who designed the house using his personal computer.

The Miller family, which owns OakBridge Timber Framing, lives with other Amish families in Mount Vernon, Ohio, about 50 miles north of Columbus.

The Elos drove to Ohio to meet the Millers and iron out the details.

OakBridge is a busy company, doing $600,000 worth of business a year. The Elos discovered the Amish company when they looked at a house in St. Charles that was built with a timber frame. The only other one in the Chicago area is in Algonquin, Lori Elo said.

"What I like is preserving the old ways of doing this," added Andy Miller, who helped his son build the Deer Park home, along with Miller's brother-in-law, cousin, and a Mennonite friend. "We're interested in preserving the way the earth is."

To get here, the Millers had to hire someone to drive them. And with all the time they spent together, a friendship sprang up between both families. They all ate together, and earlier this week, Andy Miller led grace before a lunch break out at the site.

Later on, the Elos took them downtown for dinner at a decidedly un-Amish pizzeria. They then stopped at O'Hare International Airport so the visitors could watch the planes taking off and landing.

"I was never in the city,"said Danny Miller, Johnny's first cousin. "I've never seen buildings like that."