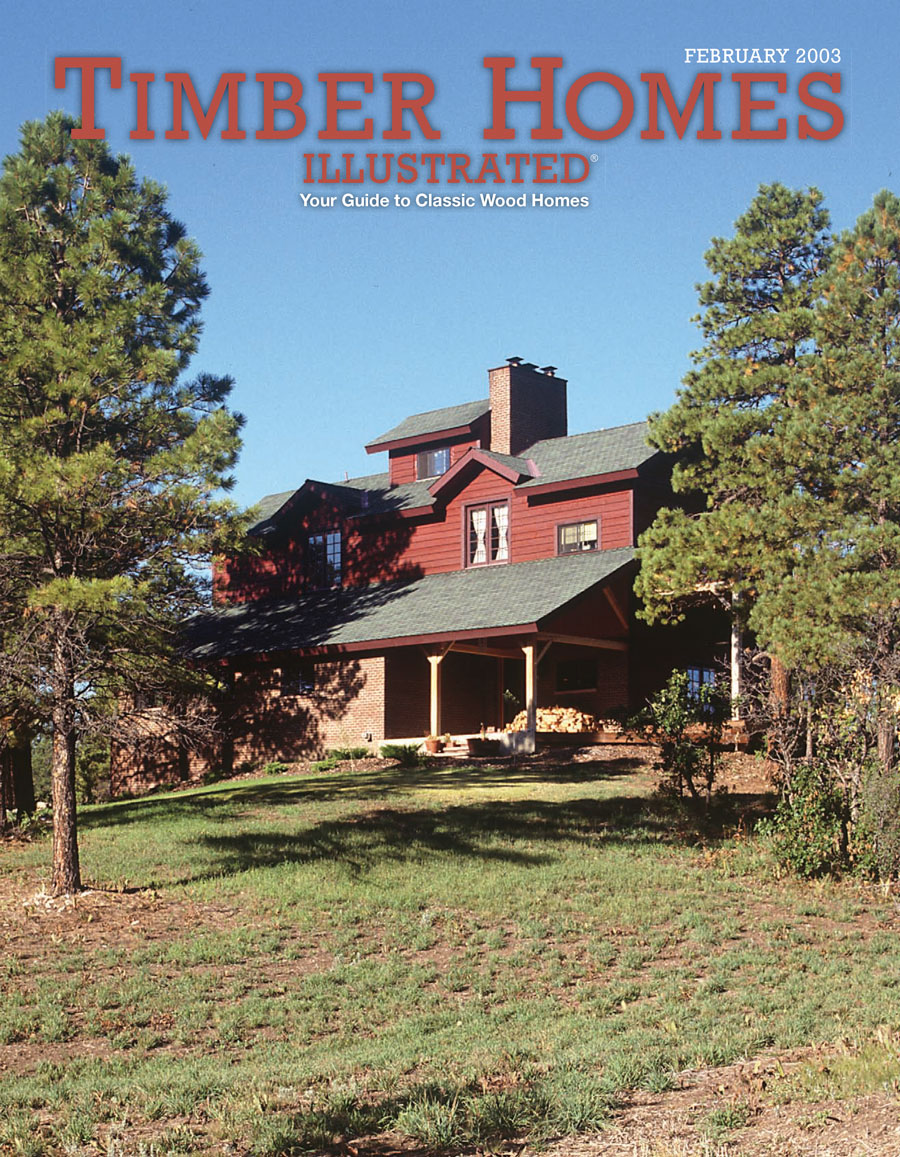 The Pagosa Springs region of southwestern Colorado is home to the largest and hottest geothermal mineral springs in the country. With the springs bubbling up from far below the surface, and mountain peaks rising thousands of feet above it, the area draws attention.

It certainly caught the eye of Greg McNeely, a developer who decided to build a large-lot subdivision of unique homes in Pagosa Springs. The development sits on a former ranch that borders a national forest and enjoys wonderful views of Pagosa Peak. "The Continental Divide wraps around this part of Colorado so the houses sit at an elevation of nearly 8,200 feet," Greg says.

The area was so appealing to Greg and his wife Michele that the couple decided to set aside a 10-acre parcel for themselves in the development. "I knew from the beginning that I wanted to build a timber-framed barn," Greg says.

Greg, who also has a working farm in Ohio, always wanted to own a barn-style home built by the Amish. "I deal with the Amish everyday when I am at my farm back East, and I always wanted to build a real barn–at least once," he says. "That's pretty much why I did this."

With the idea of a barn home taking shape, Greg looked carefully for farms wherever his travel took him. "I was looking at barns everywhere," he says. While in California on a business trip, he came across a photograph of an English hay barn dating from the 1800s.

English hay barns are the most common barns found in New England. They were typically 30 by 40 feet long, sat on a foundation of fieldstone and had their main entrance on the long side of the structure. The barn usually had three bays (areas separated by posts), each with its own function. The center bay doubled as a threshing floor and wagon road, while the other two bays sheltered livestock on one side and stored grain and hay on the other.

Once home, Greg sent the photograph of the barn to Oakbridge Timber Framing. Oakbridge, an Amish timber frame company in Howard, Ohio, uses primarily hand tools to build their frames.

The company is known for crafting frames out of sturdy, solid oak timbers. The frame's traditional mortise-and-tenon joinery is held together with strong hickory pegs. In corners, thick knee braces provide additional support to the structure. Detail work on the posts and beams often include straight or curved knee braces, chamfered edges, hand-sanding and an oil finish.

Since Greg didn't know what the interior layout of the barn was and only had a photo of the exterior, Oakbridge's design team had to creatively figure out how to fit a timber frame inside the building. "When Greg came to us with the photograph, we changed a few things, but the style was based on the original image in the photograph," Johnny says. "I don't know what the interior of the original barn looked like. We just had a rough idea of what Greg wanted inside."

Once Greg's crew had the site cleared and the foundation laid, the Oakbridge team traveled to Colorado to raise the frame. It took about a week for the group to put it up. "We put the bents and the roof's rafter system together and laid them on the ground," Johnny says. "Then we raised the structure bent by bent." While you might think an Amish company wouldn't use any machinery to raise the frame, the Amish crew had to have help lifting up the large home's heavy bents. "We used a crane for the entire project," Johnny says, "since there were only four of us there. To raise this home by hand would take several hundred people."

After the frame was raised, Greg and his crew worked together to complete the house. "I did most of the work myself, though," Greg says. "It took me about two years to finish the home.

Because of Greg's building contacts both in southwestern Colorado and Ohio, he was able to outfit the home with an eclectic collection of finishes and features. He bought, for instance, all his doors, hickory cabinets and trim from Amish woodworking shops in Ohio. A friend who refurbishes antique stoves provided Greg with a unique wood-burning stove for the downstairs rec room. "I help him restore those type of stoves," Greg says. "It dates to 1905. We use that every day in the winter."

From another friend, Greg purchased a truckload of custom-made antebellum-type brick for use inside the home and out. "A friend of mine, who owns a kiln in Mississippi, went to engineering school to learn how to make those," Greg explains.

Decking for the ceiling of the home's second floor, also came from the Promontory Point train trestle. To continue the train motif, Greg asked Oakbridge to include some elements in the timber frame that would resemble a train trestle. Oakbridge obliged, creating several small three-foot tall trusses at the top of the walls in both the weight room and rec room.

One of the most interesting features of the home is the cupola. On a real barn the cupola functions as a vent, letting heat rise out of the barn. This one, however, doubles as an observation tower. Greg's cupola is also unique in that it, too, is timber framed. "We put it together on the ground and then raised it up in one piece with the crane," Johnny says. "It's pretty interesting."

The first floor (or lowest level of the home) serves as the entry and opens directly into the rec room. Two guest bedrooms, also on this level, flank the rec room, providing guests with a common gathering point. At the far end of the enormous space is Greg's weight room and workshop.

Greg and Michele are happy that they decided to build in the development. The unique geologic character of the Pagosa Springs area turned out to be the perfect place to build an Amish barn home, full of its own natural character.