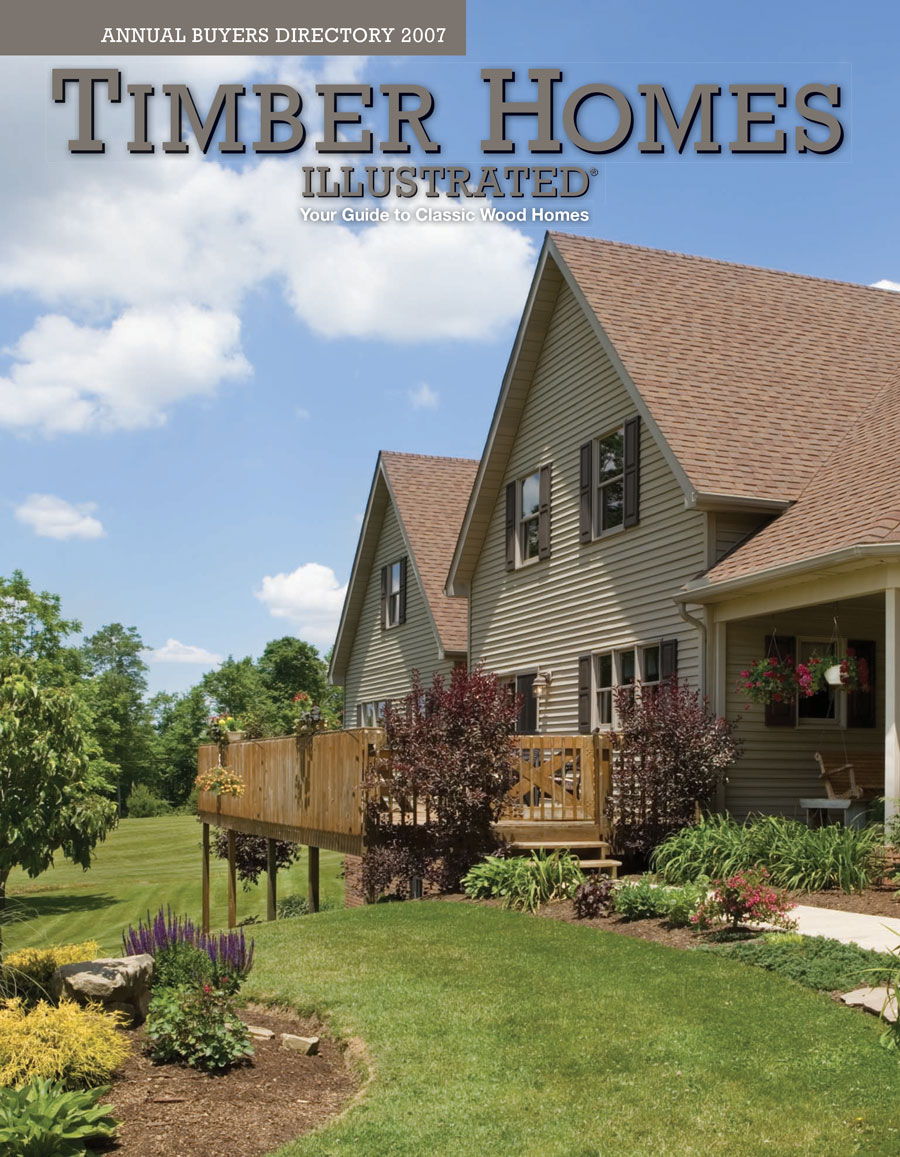 In the early years of their marriage, Mark and Melissa Lemon purchased 11 acres in a rural wooded area with an eye to the future. They hoped the acreage, which was once farmland, would be the perfect site for a home where they could live and raise a family.

Located just 60 miles south of Cleveland in the heart of Amish country, the property, although rural, is only a half mile from Fredericksburg, where Mark was raised and now owns a restaurant. Melissa also grew up in a nearby community. With many of their relatives closeby, it would be the perfect home for a family-oriented couple.

With their property chosen, it was time for Mark and Melissa to decide on a style for their new home. They initially considered log homes, but felt the style was too rustic for their tastes. They then turned their attention to timber frames, but worried that timber construction might be too costly, especially for a young couple just starting out.

To see if their dream could become a reality, they attended a timber frame expo, where they met Johnny Miller, the owner of Oakbridge Timber Framing. Johnny explained the advantages of a hybrid timber frame home. By limiting the timber frame to the main living areas and using conventional construction in the rest of the house, the couple could enjoy the grandeur of a timber frame without breaking their budget.

"Johnny is very knowledgeable and seemed to be a straight shooter," Mark recalls. "We felt comfortable dealing with him."

Another plus for the Lemons was that Oakbridge, a family-owned business that just celebrated its 20th anniversary, is located in nearby Howard, Ohio. Since Mark intended to act as the general contractor on the project, this proximity to the timber frame experts was important.

Designed for the Future

The Lemons signed off on plans to timber frame the main living areas of their home–the living room, dining room and kitchen, and use structure insulated panels (SIPs) to build the walls of the rest of the house. The area with no timber framing would feature timber accents.

"As we began considering floor plan designs, we looked at both our current needs and what the future might hold," Mark says. "Since we knew we would have children, we designed the home with an open floor plan for the common gathering areas, but with lots of private space. We also intended to live here for many, many years, and placed all of those rooms we would need in our older years on the main level."

Constructed of oak timbers from North Central Ohio, the home has 3,700 square feet of finished living space and is built in three distinct but interconnected sections. In the central area on the main level, the living room is immediately accessible from the front entry and features a wood-burning fireplace situated in the middle to act as a room divider. Walking on either side of the fireplace leads to the open kitchen and dining room. The master bedroom suite is located down a hallway on the left side of the living room.

The fireplace mantel came about rather by accident. "One of the timbers didn't fit properly. Even though the miscalculation in cutting was almost minuscule, because Johnny is such a perfectionist, he replaced the timber so that it would be exact," Mark says. "As a result, we now had a leftover piece of oak that worked perfectly for the mantel."

A two-story wing to the left of the entryway tops the master bedroom suite on the first level. The second story is designed for the children, with two bedrooms and a bath off a hallway on the left of the loft sitting area and a third bedroom on the other side

An oversized garage creates the third portion of the home. In addition to space for cars and lawn equipment, a bonus room was created on the second level and is accessible from the upstairs of the main home.

"To take advantage of the the site, we angled the garage away from the house, which resulted in an interesting corner at the back of the home. The more we looked at it, the more we realized it would make sense to finish off the area as a screened porch," Johnny says.

From Construction to Move-In

The couple had been living in a mobile home on the property for a couple of years prior to the house being built. Already living on the site made it much easier for Mark to coordinate the construction. Although Mark oversaw the project and hired all of the subcontractors, Ivan Weaver Construction helped him obtain the necessary permits. Mark also tackled many projects and spent the better part of six weeks on scaffolding, painting the drywall.

Decorating the home for their growing family involved blending comfortable new furniture with antiques. Melissa took a middle ground between rustic and traditional and incorporated an overall country style. She enlisted the assistance of her mother-in-law and sister-in-law to help with the decorating.

"We enjoy stopping at antique stores and attending estate auctions. The warmth and history of antique pieces gave our new house a lived-in and inviting feel," Melissa says. "Antiques play off the wood in the timbers, and help the home, with its open spaces, to feel very warm and cozy."

By using a variety of different types of flooring, they were able to create a home with elegance that is still child-friendly, since the Lemon family has now grown to include three children. Stone tile in the entry and oak hardwood in the kitchen and dining adds a formal touch, while cost-saving linoleum in the bathrooms and carpeting in the remainder of the home stands up to rough-and-tumble family use.

Home for the Ages

The Lemons situated their home in front of a large grove of pine trees, which then allowed them to have a big open yard for the children to romp. Mark describes their landscaping endeavors as never-ending. They have planted a lawn and fashioned flower beds for the time-being, with future plans to expand on the types of perennials and annuals they enjoy.

With the help of Oakbridge Timber Framing and by performing many of the construction tasks themselves, Mark and Melissa were able to prove that owning a timber frame is a possibility for almost anyone who plans to build a home. What was once a dream is now their permanent home for today and for tomorrow.

"Throughout the project, we were constantly impressed that Oakbridge Timber Framing is dedicated to only the highest quality of craftsmanship," Mark says. "We couldn't be more pleased with the final result."