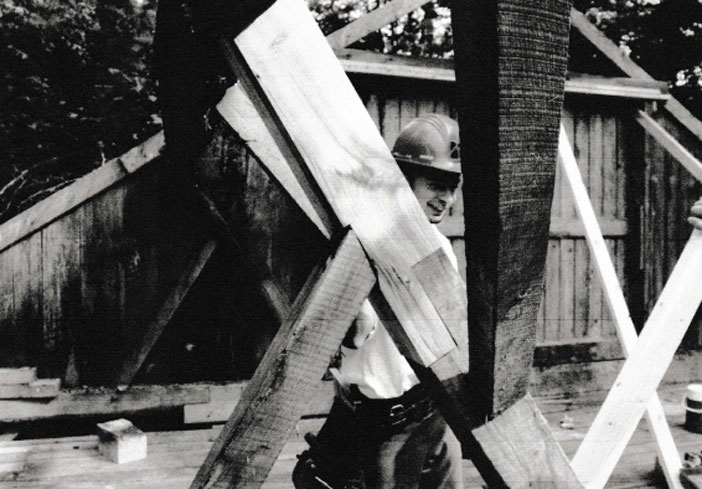 One Tuesday night in late June, Victoria Goss hurried to put her horses to bed before a storm rolled into the area. She settled the horses into one of the barns at her foal rescue, Last Chance Corral. That barn is known as the Rescue Barn because of its larger stalls.

"The boom, and the lightening, just came all at once. I could taste it in my mouth," she said. "(The tree) was the tallest one in the valley, which is probably why it got struck. When it was done, it looked like you took a toy barn and stalk of broccoli and stuck the broccoli into it."

Workers with a tree removal service spent two days hauling away the tree, which Goss was told weighed in the ballpark of two to three tons.

The tree destroyed much of the roof and damaged several load-bearing, wooden beams. Also ruined was the hay being stored in the loft, which became wet and inedible. Because the barn is so old, it was built with large, hand-hewn beams, making the structure extremely costly to repair.

On the other hand, Goss said she might not have escaped personal injury had the barn been newer.

"lf this was built in conventional architecture, I never would have known what killed me," she said. "It was these 12 inch beams that stopped it. Most conventional wood is two-by-eights, two-by-sixes, and that tree would have plowed right through them. The barn saved my life, I think because I saved its life. So I'm honor-bound to save its life again."

Problem was, insurance would not cover the damage. Simply rebuilding was out of the question, as Last Chance Corral is a non-profit and Goss noted that saving horses is not a profession that pays well.

"My mother always said, 'you could have been somebody, but there's always some horse with it's hoof out,"' Goss said. "To do what we do for these animals means that we don't make a big amount of money, and everything we do make goes back into some animal's problem."

Thankfully for Last Chance Corral, some Good Samaritans have stepped up finish the task of rebuilding the barn. Oak Bridge Timber Framing, an Amish-staffed company which builds custom home frames, got in contact with Goss and offered to rebuild the barn.

"I heard about them from a woman who adopted horses from me," Goss said. "People often say 'Oh, we're going to come out and do this or that then something else comes up that they want to help with, but most people give what my mom called 'lip service.' But then he called me back."

"He" is Johnny Miller, one of the Oak Bridge's owners. Miller said his company believes in giving proceeds to charity or toward projects like rebuilding the recovery barn. One unique aspect of the company's work is the use of Purpleheart pegs.

"We put one purple peg in each of our structures to remind us to give to others," Miller said.

He also noted that the peg, which is used in one of the joints to help hold the structure together, is made out of dull purple wood from South America called Purpleheart.

The barn itself has an interesting history. It was originally built in 1853 by Harlow Calvert and features rival tobacco company signs on each side - Mail Pouch and Kentucky Club. lt is also on a historical register of barns.

Decades ago, Goss heard the barn would be torn down to make way for road construction and hurried to save it. She and some helping hands dismantled the structure and rebuilt it on her property. Since then, she says around 30-40 horses make their way through the barn each year. That rescue process has been put on hold.

"I haven't brought any extras in until we get this barn done," Goss said.

Miller said he anticipates the work on the barn being done within the next couple weeks.

"I usually end up doing everything myself, because I can't afford to hire somebody," Goss said. "That money could better go to hay or medicine. But I never anticipated this much would be done this quickly and from the heart."

Rebecca Chamberlain, Goss' sister and the IT director for Last Chance Corral, said that the donated work and supplies made a huge difference.

"It means the world," Chamberlain said. "It really restores our faith in humanity."