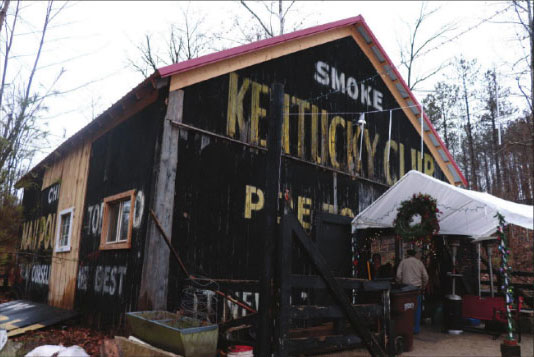 In June, the recovery barn at Last Chance Corral was destroyed by a large tree that smashed through the roof, threatening the lives (both equine and human) within the barn.

Inside the barn was Victoria Goss, who runs the foal rescue. She credits the old wooden barn with saving her life.

Six months later, the barn is finally ready to be a shelter again for young horses.

The new barn is ready just in time for thoroughbred breeding season, which keeps the neonatal foal rescue quite busy each year.

Many associated with Last Chance Corral, including volunteers, workers, and friends, gathered on New Year's Eve for a ribbon cutting and celebration of the barn's return. Many who were present called the event a celebration of gratitude, giving thanks to those who worked have over the latter months of 2018 to restore the barn.

Goss herself has a passion for saving things - the historic Last Chance Corral barn was slated to be torn down many years ago, and she hurriedly dismantled the structure and rebuilt it on her property along Old Route 33. She says reopening the barn means not only a lot to her, but also to the horses that will be served.

"It means all the work I did to take this barn apart one beam at a time to save its life ... wasn't for nothing," she said. "I was right there in the middle of ground zero, and (the barn) shook and she groaned and she swayed, but she didn't go down, and she deserved another chance - that's what we do, we give another chance."

The structure is on a historical registry of barns, having been originally built in 1852. It features rival tobacco company advertisements on each side - Mail Pouch and Kentucky Club.

After the storm damaged the structure, Goss sought help from OakBridge Timber Framing, an Amish-staffed company which builds custom home frames. Goss said she prefers traditional wooden barns to metal ones, and even credits the wooden frame as having saved her life during the 2018 storm.

"People said just burn it," Goss said. "Build a nice new metal barn, and I said I'll never own one of those, because if a tree falls on it you're going to be dead. I wanted the integrity that this barn was originally built with, and I found somebody who could provide me that."

The OakBridge team rebuilt the main portion of the barn, placing new beams, rafters and a steel roof, along with replacing some of the siding that was damaged. All the beams were hand-hewn in the OakBridge workshop before installment: a necessary step, but a costly one.

Goss said she approached the building team's leader with a check in hand, but they wouldn't accept it.

"Out of nowhere, he wouldn't charge me. I came down and had a check in my hand, 'will you take this?'" she said, "He said 'no,' because he believed in giving back and in the end that's what we're doing, we're giving back to the animals."

Some aspects of fixing the barn are yet to be completed - the distinctive Mail Pouch tobacco ad covering one side of the barn will soon be raised back up again.

As for the foals, some have already returned to call the barn home once more.

"This barn lives again for the second time," Goss said at the end of the ribbon cutting. "Let the horses come forth! The recovery barn has recovered."