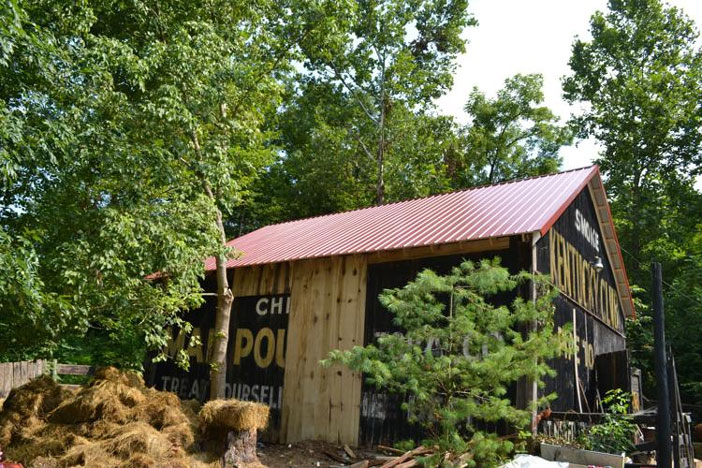 An Ohio timber framing company – owned and operated by an Amish family out of Loudonville in northern Ohio – on Aug. 4 finished up building and roof repairs to a 165-year-old barn at Last Chance Corral horse rescue, southeast of Athens.

The barn had been crushed by a large tree that was struck by lightning during a major storm in late June (thankfully, none of the people, horses or other animals at Last Chance were injured in that incident).

Last Chance owner Victoria Goss reported on the facility's Facebook page on July 28 that Oakbridge Timber Framing had offered to do the work on the barn after a Last Chance supporter alerted Oakbridge owner Johnny Miller about the horse rescue's plight.

"We didn't hold much hope that they would take the job, and if they did, that we would be able to afford them," Goss said in that Facebook post. "However, Johnny was sensitive to our cause and our situation and gave us some special pricing, even donating a good portion of the work. We are astounded! These wonderful men are the true silver lining in this horrid event."

Oakbridge reported on Facebook on Saturday (Aug. 4) that they had finished the work.

"We had a great day on Saturday finishing the last of the timbers and installing the roof. It's back in business, and the horses are safe and happy," the post reads. "This has been a wonderful experience, filled to the brim with great people – our thanks to all!"

The NEWS previously reported that the barn was built in Guysville in 1853 by Harlow Calvert, a local farmer who would go on to serve in the Civil War, be captured and sent to the notorious Andersonville Prison, and then escape from it.

It had been scheduled to be bulldozed as part of the U.S. Rt. 50 widening project near Guysville, but Goss had said she thought it would be a good addition to her farm, which specializes in saving and putting out for adoption the foals of brood mares at racing farms.