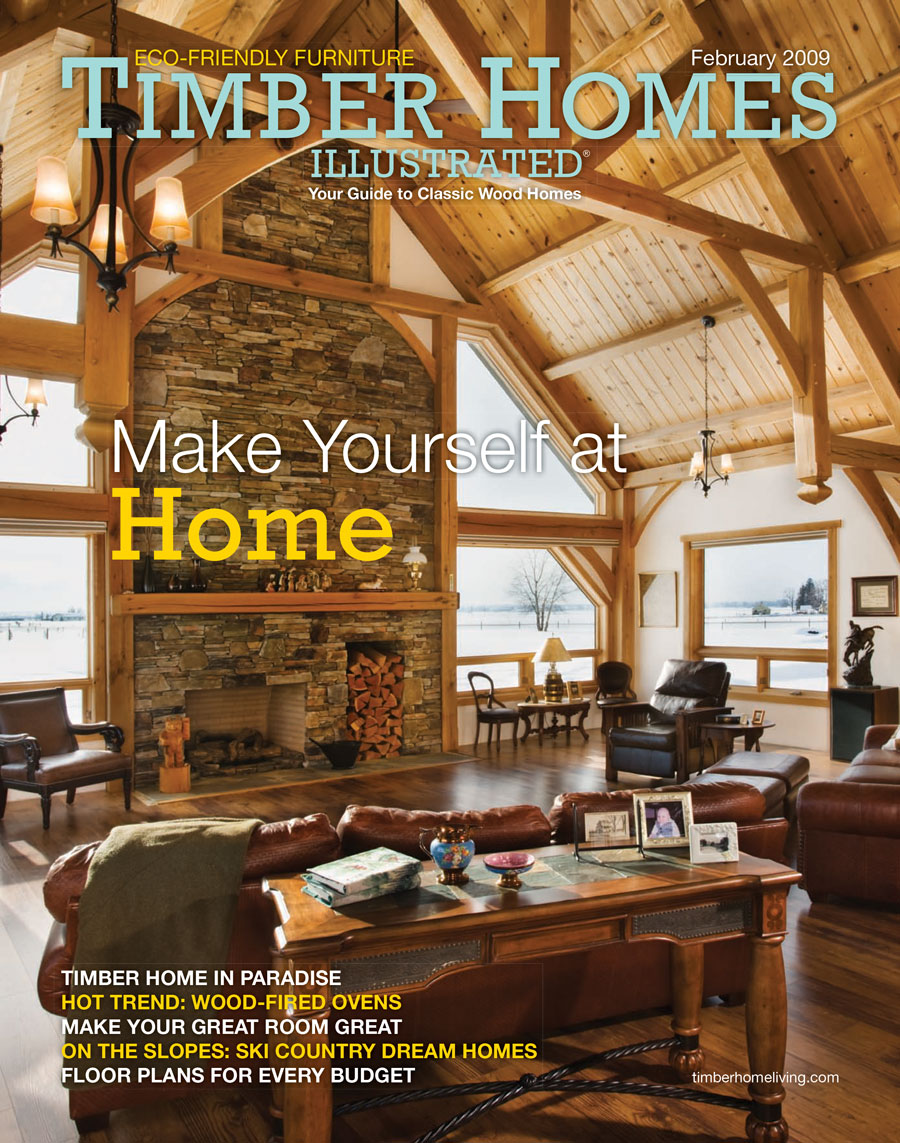 The retired couple (David a former engineer and Vickie a nurse) moved to Montana's Gallatin Valley from South Carolina about six years ago, with a shared goal of building on the 5.5-acre property they had purchased in 1995. But it was David's dream to make that home a timber frame.

"It was really David's project. He birthed it," Vickie says, laughing. "He did run the plans by me, but I had trouble visualizing the house." Not a problem. David, who had taken architecture courses and earned a builder's license, built a miniature of the timber home he envisioned, complete with ceiling fans and tiny furniture. His efforts paid off when Vickie enthusiastically endorsed the design.

David's design for the home incorporated the couple's basic goals: an open floor plan; plenty of large windows for the fabulous views; low maintenance; durability; and a lot of wood, in deference to David's appreciation for barns. Plans in hand, David went looking for the right timber framer, and was quickly taken with OakBridge Timber Framing Ltd., an Ohio company owned by an Amish family. "Their homes have such tight joints," David enthuses. "And they don't pre-fit their bents like others do, they put them together on site. They were very impressive."

The fact that OakBridge offered oak frames (they also use Douglas fir) was another plus. David, who chose timber framing mainly because of his fondness for barns, preferred oak, which is rare in Montana. "I like oak, it's very strong," he says

The Kirsches hired OakBridge to finalize David's design, and the company raised the frame in 2003. The couple hired their son, Michael, owner of DMK Builders, as the builder, and construction was completed in 2004.

David and Vickie's oak frame was cut, but not pre-assembled, at OakBridge's Ohio facility. Instead, it was first put together on the Kirsches' Montana property. "Not having to assemble the frame and then take it apart at the shop saves homeowners money," says Johnny Miller, an OakBridge owner. "Of course we double-check all our calculations so this procedure works."

The 2,396-square-foot main level includes a great room, dining area, kitchen and master bedroom suite, while the 1,450-square-foot second floor features a spacious loft, a guest bedroom with balcony, bathroom and a study that doubles as a third bedroom. A hallway on the second floor connects to a spacious one bedroom guest apartment above the couple's two-car garage.

The home's bright, double-doored entry leads to a dining area designed to accommodate larger gatherings; two identical dining tables were subtly bolted together to allow up to 18 to dine comfortably. The larger living room timber frame features a hammerbeam, king post and strut combination. "The hammerbeam creates a very open feel... and this combination makes for a really strong truss," says Johnny. Indeed, the truss spans 28 feet across the room. Acorn pendants on the truss posts were hand-carved by Johnny's father.

On one side of the living room, OakBridge framed the couple's cultured stone fireplace with timbers that follow the line of the chimney and the large, pentagonal windows that rise 25 feet to the roof peak. "We didn't put another hammerbeam truss on that end of the room because we did not want to take away from the windows," Johnny points out.

What about that joinery that had made such an impression on David? Part of the tight fit comes from how OakBridge's crew drills holes for the joints' wooden pegs. "We offset the pin holes so that when we drive in the pins it pulls the joints very tight," Johnny explains. "We also slightly bevel the shoulder on the tenon. These techniques make for very tight joints."

The couple's kitchen also opens to the living room, with a peninsula breakfast bar on either side of the opening. David and Vickie worked with Catherine Wallace, from a local home supply company, to design the kitchen. "She suggested the distressed oak cabinets so they would be similar to the timbers, and the cultured stone for the peninsula bases," Vickie notes. "So we call it 'Catherine's kitchen.'" A wall of built-in oak bookcases in the living room was designed to match the kitchen cabinets

A Bonanza of Ideas

Vickie, whose former home in South Carolina was traditionally appointed, credits reruns of a popular old television show for her ideas on Western flair furnishings. "I used to tell my daughter that I looked to 'Bonanza' for ideas," Vickie laughs. Furniture includes overstuffed leather sofas and dark wood tables. Several rooms feature signed prints by "camouflage artist" Bev Doolittle, whose Western-themed prints include images that seem hidden on first glance. The Western motif continues from the kitchen, where a Cambria stone back-splash features a grizzly bear etching by local artist Stuart Galgerud, through to the loft, where the couple keeps a teepee and a buffalo hide rug to delight their four grandsons when they visit.

The Kirsches have put their hobbies and family heirlooms on display, adding to the homey feel. David's German LGB model trains are exhibited atop timber beams on both floors, and Vickie's collection of old plates, many handed down from her mother, grandmother, and even great-grandmother, add interest and color. Antique furniture, much of it from Vickie's aunt, is scattered throughout the home, and a re-sized pew from the couple's former church serves as a boot bench in their foyer

For all it's durable construction and fine craftsmanship, it is the simple openness of the home that pleases the couple the most, making the airy living room David's favorite. "I like the open spaces." he says. "It does a lot for my frame of mind to see the outdoors, the full moon, the clear skies, the stars... and we can see it all from our living room."