A House Can Soar to Heal the Heart 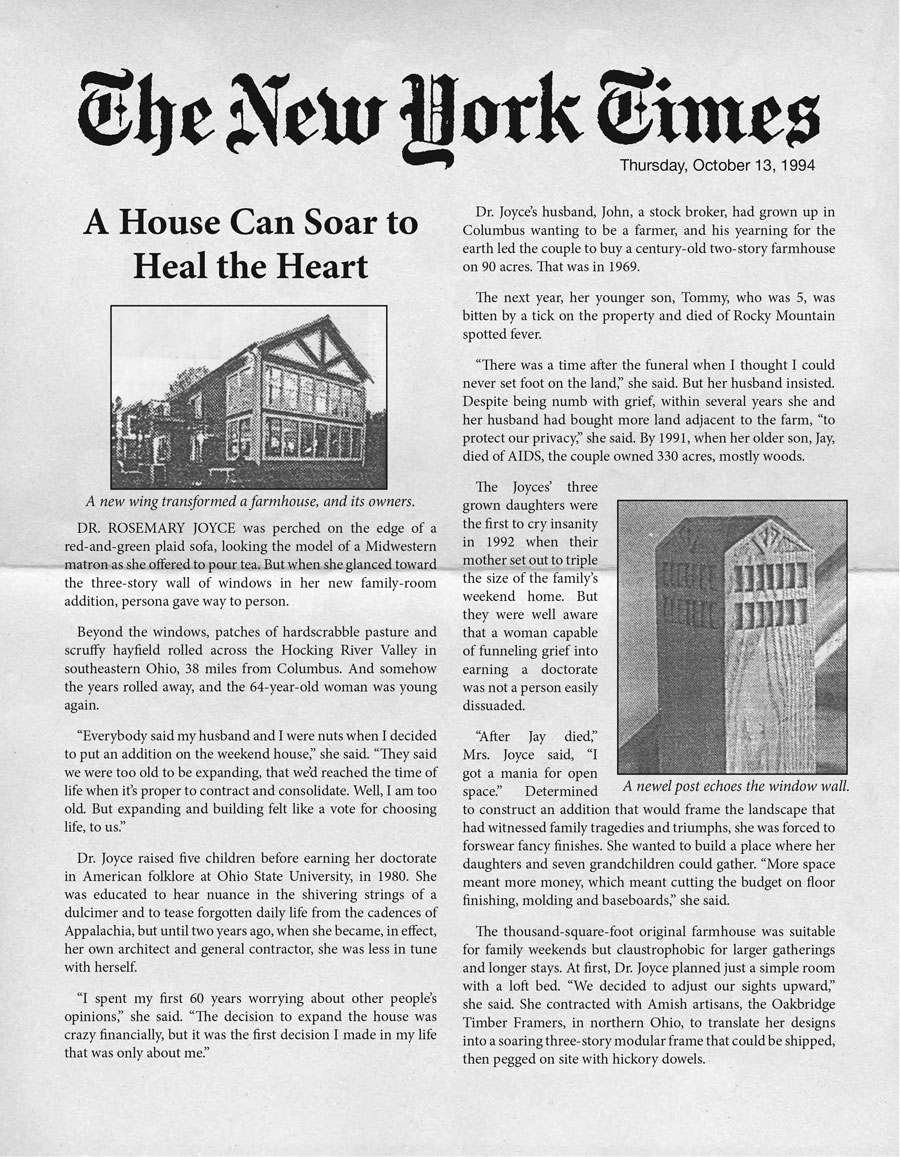 A House Can Soar to Heal the Heart

DR. ROSEMARY JOYCE was perched on the edge of a red-and-green plaid sofa, looking the model of a Midwestern matron as she offered to pour tea. But when she glanced toward the three-story wall of windows in her new family-room addition, persona gave way to person.

Beyond the windows, patches of hardscrabble pasture and scruffy hay field rolled across the Hocking River Valley in southeastern Ohio, 38 miles from Columbus. And somehow the years rolled away, and the 64-year-old woman was young again.

"Everybody said my husband and I were nuts when I decided to put an addition on the weekend house," she said. "They said we were too old to be expanding, that we'd reached the time of life when it's proper to contract and consolidate. Well, I am too old. But expanding and building felt like a vote for choosing life, to us."

Dr. Joyce raised five children before earning her doctorate in American folklore at Ohio State University, in 1980. She was educated to hear nuance in the shivering strings of a dulcimer and to tease forgotten daily life from the cadences of Appalachia, but until two years ago, when she became, in effect, her own architect and general contractor, she was less in tune with herself.

"I spent my first 60 years worrying about other people's opinions," she said. "The decision to expand the house was crazy financially, but it was the first decision I made in my life that was only about me."

Dr. Joyce's husband, John, a stock broker, had grown up in Columbus wanting to be a farmer, and his yearning for the earth led the couple to buy a century-old two-story farmhouse on 90 acres. That was in 1969.

The next year, her younger son, Tommy, who was 5, was bitten by a tick on the property and died of Rocky Mountain spotted fever.

"There was a time after the funeral when I thought I could never set foot on the land," she said. But her husband insisted. Despite being numb with grief, within several years she and her husband had bought more land adjacent to the farm, "to protect our privacy," she said. By 1991, when her older son, Jay, died of AIDS, the couple owned 330 acres, mostly woods.

The Joyces' three grown daughters were the First to cry insanity in 1992 when their mother set out to triple the size of the family's weekend home. But they were well aware that a woman capable of funneling grief into earning a doctorate was not a person easily dissuaded.

"After Jay died," Mrs. Joyce said, "I got a mania for open space." Determined to construct an addition that would frame the landscape that had witnessed family tragedies and triumphs, she was forced to forswear fancy finishes. She wanted to build a place where her daughters and seven grandchildren could gather. "More space meant more money, which meant cutting the budget on floor finishing, molding and baseboards," she said.

The thousand-square-foot original farmhouse was suitable for family weekends but claustrophobic for larger gatherings and longer stays. At first, Dr. Joyce planned just a simple room with a loft bed. "We decided to adjust our sights upward," she said. She contracted with Amish artisans, the Oakbridge Timber Framers, in northern Ohio, to translate her designs into a soaring three-story modular frame that could be shipped, then pegged on site with hickory dowels.

The addition totals 2,700 square feet and includes a three story family room, a kitchen, "playshop," master bedroom, an office and two bathrooms. To alter the original farmhouse as little as possible, the Joyces attached the new section by replacing part of a bay window with a doorway, then adding a seven-foot hallway that also moved the construction as far as possible from a handsome linden tree.

"The kitchen in the old house is so small, and one thing I've learned over the years is that I don't want to be alone in the kitchen," Dr. Joyce said. In the new space, six people can work and 20 more can gather.

The vision had changed. Rather than planning a getaway, Dr. Joyce was now designing a home for retirement, children and grandchildren. "I realized that I wanted to live in this house, full time," she said. "It took many drawings for me to understand that I wanted to change my life. Consciously, I was thinking about the family and the grandchildren, about what life had shown me matters for children, for family. On another level, I had obviously been designing a new life for myself."

The couple sold their large home in the Bexley section of Columbus and bought a condominium instead. The renovation continued.

Dr. Joyce was left to select the material for the walls and siding. "I wanted cedar siding, but the cost was, at that point, out of the question," she said. She chose plywood with the look of barn siding and insulated it with rigid foam panels, in part to off set the heat loss from the wing's focal point: its 48 windows and four sliding glass doors (they cost $18,000). "I'm always freezing from July on," she said, "but this is the warmest, most draft-free house I've ever been in, despite all the dire warnings."

Mrs. Joyce was looking at an expanded living space -- and a depleted budget. Oak floors became ash floors, complex paint effects gave way to a simple whitewash and exposed timbers. But details on the staircase were something on which she would not compromise.

"I'd contacted a local artist, who carved a rendition of the north window wall on each side of the newel posts," she said. "When I climb those stairs at night I remember the view, I remember the past, I remember a lot of things. Mostly I count the things that are important in this life."

Space and a unity with the environment ended up being the most important things to her. Almost as important as the process of renovating the old farm house. "I don't know how to say it without seeming corny, but I learned so much about working with people, and about my own capabilities," she said. "I've done creative things with music and writing, but I never thought of myself as a creative person inside. This house helped me push myself forward.

"I'm trying to be looser in my old age than I was when I was a mother," she continued. "I wake up in the morning and put on music and dance through here in my nightgown. People thought we were crazy to do this so late in life, but it was a vote for living after our son died. I don't regret anything I did. It's a joy to wake up every morning."

ROSEMARY JOYCE had intended to work with an architect, but finally decided to design a barn-like addition herself.

Through an ad she found Oakbridge Timber Framing of Howard, Ohio, an Amish company with its own source of oak timbers.

"They do just one house a month," she recalled, "so we had to make up our minds at once, which was pretty scary. It was January and they were booked till August.

The delay was a blessing; it took Dr. Joyce dozens of drawings to finish the design.

For two days, six builders methodically assembled three separate timber frames. Then came house-raising day, when they connected the frames, attaching beams with pegs in mortise-and-tenon joints, rather than nails. "It was like watching a ballet, they were so graceful," Dr. Joyce said.

Oak beams are typically treated with clear sealer. "But I wanted to use white stain instead," Dr. Joyce said. "Most people were appalled, but the Amish said very slowly, and very tactfully, 'Well, that's not my taste, but if you want it, we'll do it.'"