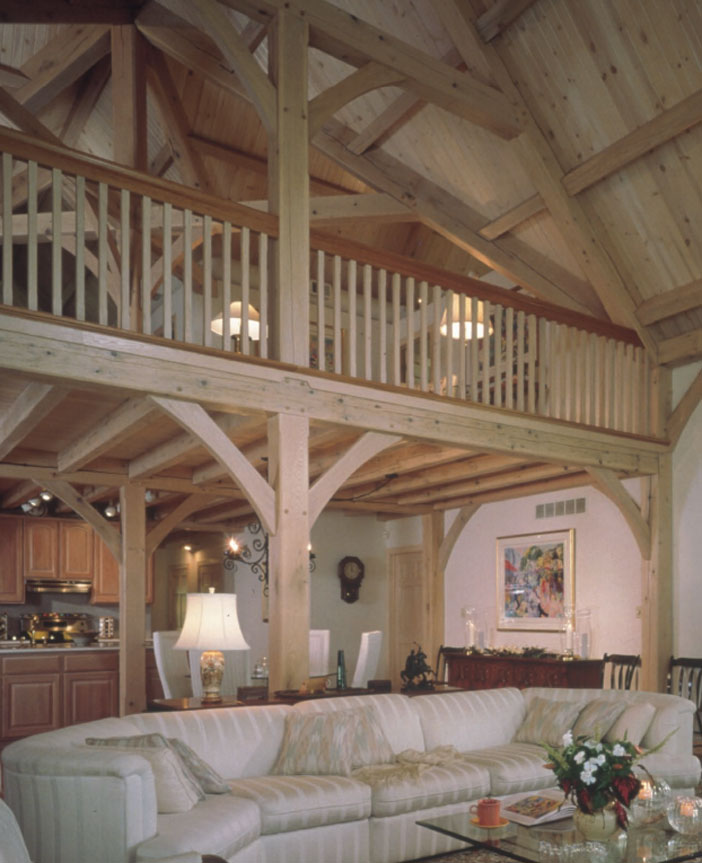 They say the third time is a charm. For Fred and Pat Lentz of Ohio, their lucky number seems to be 19.

Fred, a retired electrical engineer skilled in carpentry and mechanical drawing, had either built or renovated 18 houses with his wife before finally realizing his long-held dream of owning a timber frame home. Th e beautiful post-and-beam house he and Pat erected on Catawba Island in Lake Erie calls to mind the exposed rafters of the barn where Fred loved to play while growing up on his family's farm.

"I always wanted to re-do an old barn, but I never found one in the right place," Fred says. "I didn't have the ambition to tear one down and put it back together, so I decided to have someone build a timber frame for us."

Pat approved, as long as the home would have some white walls and would not look like a big hunting cabin or lodge.

In the summer of 1994, the couple obtained price quotes from two timber frame companies, including Oakbridge Timber Framing, an Amish-owned company in Howard, Ohio. Not only did Oakbridge return the lower estimate, but, as Fred discovered while watching their crew erect several timber frames, they also offer an impressive level of workmanship.

Fred was particularly awed by an unusual octagonal timber frame topped by an umbrella-shaped roof. "When they dropped the roof on it, it was like putting a lid on a jar," Fred says, his voice filled with admiration for the Oakbridge crew. "I just stood there and blinked my eyes. I couldn't believe it. The craftsmanship was unbelievable."

Even before the couple chose their timber framer, Fred designed an unique four-bedroom, five-bathroom floor plan that encompasses 4,600 square feet of living space and a 1,600-square-foot, eight-car garage to accommodate his antique car collection. The first floor features a large family room and two dining areas open to the kitchen so that Pat can enjoy the couple's frequent guests while preparing food.

To create that same feeling of openness on the top floor, which includes a master suite and two guest bedrooms, Fred insisted that the walls enclosing the bedrooms be only 8 feet high. Because the walls do not reach the ceiling, light from the bedroom windows is able to flood the entire second floor, including a cozy loft area that overlooks the great room.

Other features include a second master suite on the main floor, and a large closet that could one day be converted into an elevator shaft operating between the basement and the main floor. Pat's mother was living with them at the time, and the couple wanted to ensure that she—and they—would enjoy the home as she advanced in years.

Although Fred had thoroughly planned the design, he had created his plan with standard stick-frame construction in mind. So it fell upon Oakbridge's designer, to transform Fred's drawings into workable timber frame blueprints. "The frame was based on a simple cross-shaped pattern, with one long main body and two intersecting gables opposing each other," Johnny says. "It's a four-way valley system, with four gables intersecting." Oakbridge designed a hammerbeam truss to provide cathedral ceilings in the great room. For the rest of the home, a 1½-story timber frame bent with mortise-and-tenon joinery was used.

The most complicated aspect of the frame was not its design and construction, but its finish. Most of the woodwork in the house, including the oak frame, the cherry kitchen cabinets, the pine and fir tongue-and-groove ceilings and the pine doors, are covered with a whitewash specially blended from penetrating oil and a white pigment. Only the cherry floor were left natural.

"That was one of my wife's brainstorms," Fred says of the whitewashed finishes. "She wanted white walls, but she didn't want the timbers just jumping out at you."

An oak frame would usually be oiled, causing the frame to darken slightly, and the Lentzes wanted to retain the natural color of the untreated wood. To find the right finish, Oakbridge's crew experimented with various ratios of white pigment and penetrating oil until they achieved the desired shade.

"We put a very thick coat of oil on, and then wiped it off," Johnny says, noting that the mixture had to be constantly stirred to keep it from separating.

A common challenge in timber frame homes is concealing the plumbing. The ceiling of the Lentzes' main living area also serves as the floor of the second level, leaving no place to hide pipes between the ceiling and floor. This was solved by stacking bathrooms and situating them back-to-back. "We were able to conceal the plumbing up and down through thick walls in the closet and dropped ceilings in the bathroom closets," says Fred, who acted as his own general contractor.

Heating on the main level is provided through floor registers that funnel air from a basement furnace. But heating the second level required more creative problem solving because the ducts, like the pipes, could not be hidden easily. Fred opted for an industrial round spiral duct that lies on a ceiling over the upstairs bathrooms and closets. Registers, spaced periodically throughout the duct, channel air into the rooms.

By December 1995, the Lentzes' home, with its warm, brick and stone exterior, was finally completed. "I worked on the house seven days a week," Fred says.

When it was finished, Fred and Pat were too tired to face the task of moving. "We packed our suitcases and went to Florida for two weeks," he says with a laugh. "Then we came home and moved in."

It took months of planning, hard physical labor and carefully negotiated compromises to unite Pat and Fred's separate visions. But in the end, Fred says, Pat got the white walls and light wood she wanted. "And," he says happily, "I still got my timber frame!"