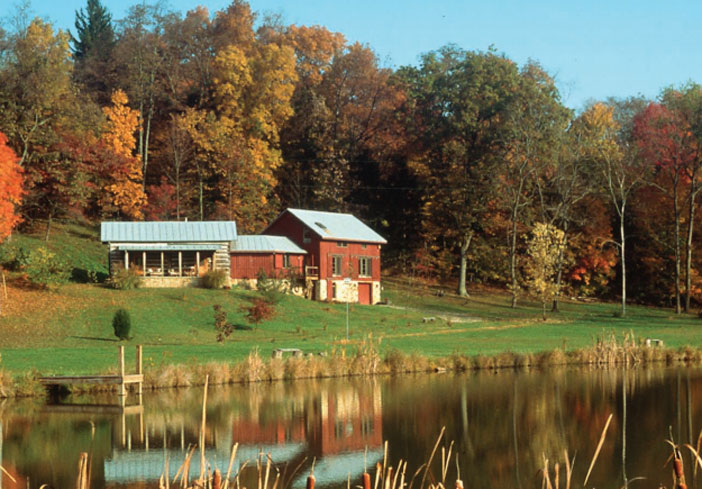 With a hectic lifestyle in Columbus, Ohio, Judy and Craig Jenkins dreamed of having a place in the country where they could go to get away from it all. When they set out to look for land for their rural retreat, they had no idea what type of home they would build once they found it. Aft er discovering 130 acres in rural Knox County, they found the answer in the form of an 1850s log cabin that was sitting on the property.

"This old decrepit cabin had been abandoned for years," explains Judy. "Really all we could salvage were the chestnut timbers which had been covered up with siding. We struggled a lot with what we could add on. A logical expansion was a timber frame. It was kind of an evolution. The siting of the home is credited to the couple's daughter, who was just 12 years old at the time. "Our first inclination was to build at the top of an enormous hill on the property that offered great views," recalls Judy. "But when we went up there, our daughter said, "It's just not cozy up here!"

"It took a 12-year-old to knock some sense into us," adds Craig, laughing. Today, 10 years later, the Jenkins are still grateful for the young girl's advice, for their home's wooded surroundings make it feel incredibly rustic and private.

"We enjoy hiking up the original hill," says Judy, "but we realize that it would have been a very barren place to build a home."

The ideal site for the home turned out to be just 300 yards from the original log cabin. Tucked into a hillside surrounded by grassy hills and woods, the setting offers a sense of coziness and quiet respite. Judy likes the fact that the house cannot be seen from any road.

Finding a timber-frame company to handle the job proved easier than expected–nearby Holmes County has a large Amish population who are well known as fine craftsmen, so talent was plentiful. Following a recommendation, the Jenkinses contacted Oakbridge Timber Framing of Howard. The Amish-run company worked with the couple to fine tune the floor plan so that it would more readily accommodate timber-frame construction.

Shortly after, without a written contract, the project began. "This whole thing was done on a handshake," recalls Craig. "The philosophy was simply, 'I trust you, you trust me."'

The Jenkinses were very impressed with the fine craftsmanship exhibited by Oakbridge. They were also pleased with the stress-skin panel work done by another local Amish crew. "It all worked out perfectly and we couldn't be any happier with the results," says Craig.

When the home was near completion, Craig and Judy hosted a "chinking party" for the doctors and nurses who work with Craig at a Columbus hospital. "We had 40 or 50 people here from work," recalls Craig. "We had to have it chinked before winter, so this was a fun way to get it done."

The resulting home and cabin combination offers 3,500 square feet of living space–2,000 in the timber-frame portion and another 1,500 in the cabin. The timbers from the original cabin were torn down, renumbered and assembled on the new cabin site, leading a sense of yesteryear. Past and present truly come together in the gallery, a connecting hallway that joins the primitive cabin portion of the home with the new timberframe structure

The layout of the home is geared to practicality. An open floor plan in the timber frame portion houses the kitchen, living room and dining room in a great room setup. An upstairs loft contains a bedroom and bath. The garage, utility room and mudroom are located in the basement. In the cabin, a living area, bath and bedroom fill the main level. An original spiral staircase leads up to a bedroom and an additional room. A small porch off the cabin provides even more living space.

The exterior of the home is in tune with its rural setting. Red-stained cedar siding gives the home a barn-like flavor. A base of local sandstone provides a nice contrast in texture. One of the couple's favorite features is the use of large sliding barn doors to cover up the windows. "Since we don't live here year round, we slide the shutters across when we're gone. This can be done from the inside," says Craig. "Visitors to the home are almost always surprised by what they find when they walk inside," says Judy. "From the outside, they think it's a barn," she explains. "They enter in a basement which is not a typical way to come in. They are taken aback by the bright, airy rooms and the pretty views."

The timber frame leaves a lasting impression. The artistry of the beautiful oak timbers celebrates a time-honored building tradition.

The homeowners tackled the interior decorating themselves, creating spaces that reflect their desire for coziness. "We went for comfort, a family-friendly atmosphere," says Judy. "It is casual yet rural, a clean country look. The use of red and white in the timber frame evolved naturally. I had a red and white quilt that just said 'Ohio country.' I collect them now and they really work well with the red barn look. We also have many Amish-made furnishings in the home."

Subtle differences in decorating distinguish the two sections of the house. The timber frame is bright and airy with a cheerful ambiance. Judy says the cabin is more primitive in feeling and is a little more "muted" and natural. "There is a real serenity to the house overall," she says. "The whole setting is so peaceful. A horse and buggy is a common site along our country roads."

"It's a place where I can restore my sanity after a crazy week at the hospital," adds Craig. "It is something vastly different than what we have in the city."

Friends and family are just as enthusiastic about the home as the Jenkinses. Every year, they flock to the home for a traditional Thanksgiving celebration. The rolling hills, woodland and country wildlife often prove irresistible, and many stay for more than the turkey dinner. The property also features a semi-restored, turn-of-the-century timberframe barn and a large pond that is used for fishing and swimming.

Though the owners don't get to spend every weekend at their country home, they cherish every moment they are there. In the springtime, the family loves to search the fields for tasty morel mushrooms. Other favorite activities include hiking, woodworking and beekeeping. Craig says they got into beekeeping about eight years ago when a swarm of bees built a hive inside their shuttered doors, outside the glass. "Th ere was a honeycomb plastered against the glass," he says. "It was like a display you see at a state fair, a nature show for two years. You could see the amber color of the honey through the glass."

Today, the couple jars the honey from their beehives and gives it away. In fact, they give away so much honey that Judy says they have become known as "Th e Honey People." With a cozy setting and jars full of sweet honey, it's no wonder that Craig and Judy think of their country getaway as "Home Sweet Home."