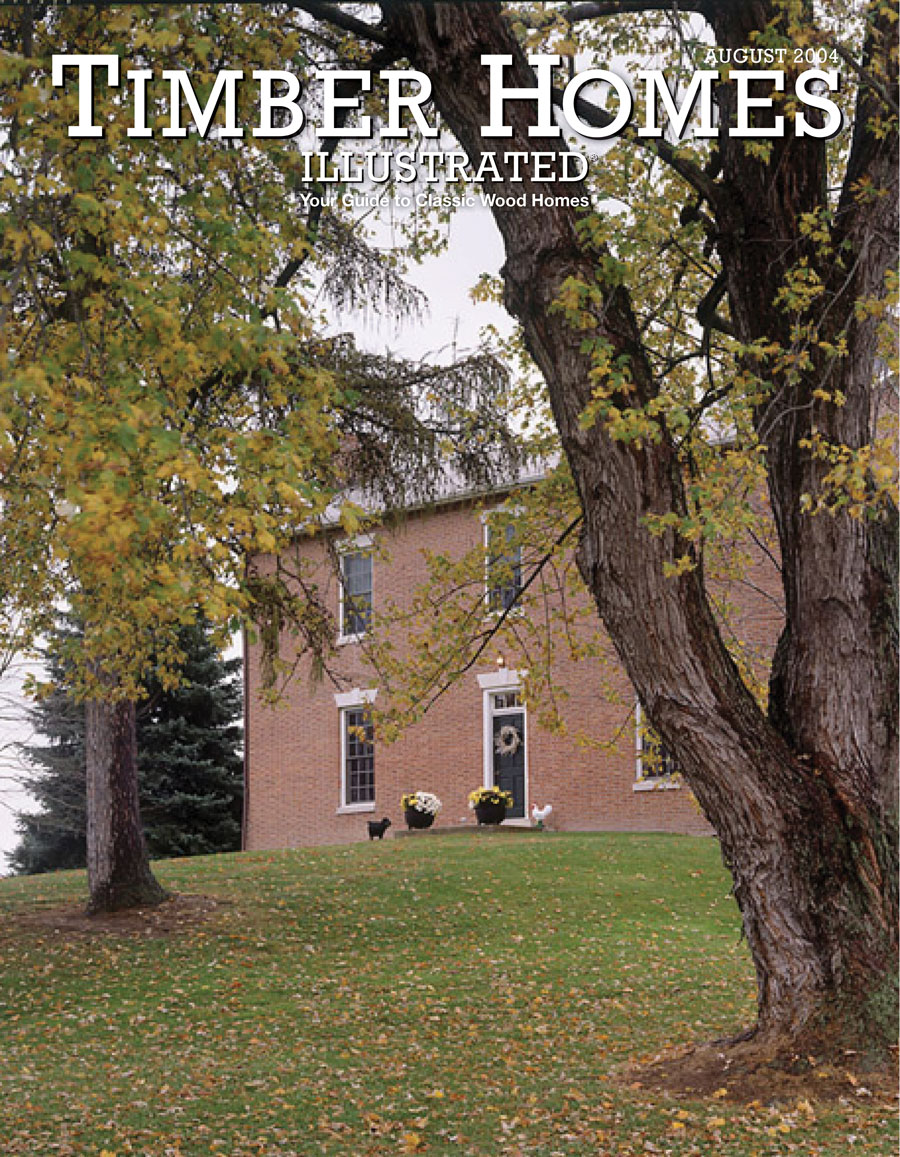 If you're really passionate about something, you want to live it, breathe it and be right in the middle of it every day. That's how Jim and Lyda Cook feel about golf. So, they built a public golf course in Ashville, Ohio, and made their home there, too.

"We live right in the middle of the golf course," Lyda says with a laugh. The couple's home, a hybrid combination of old and new construction, is literally surrounded on all sides by golf holes. While they had to build their home in such a way so as to protect it from an almost daily onslaught of wayward balls, Jim and Lyda wouldn't have it any other way.

The Lay of the Land

The story of the Cooks' home began with a dream. As avid golfers (even today their two children play professionally), it had always been a goal of the Cooks to develop and run in their own golf course. It was a dream made possible when a large 376-acre farm nearby went on the market. The couple knew about the farm because of a personal connection: Jim's father had worked on the farm as a boy in the early 1900s.

Such a large tract of land so close to their hometown presented an opportunity the couple couldn't let slip by. So without much hesitation, Jim and Lyda bought the property soon after a descendant of the original owners put it up for sale. The Cooks deeded three and a half acres to themselves for the house and left the rest of the property to be incorporated for the golf course.

The farm's topography had all the necessary features to make a challenging golf course: gently rolling hills, dips where man made ponds and sand traps could be strategically placed and flat stretches ideal for fairways, teeing off and putting.

Besides the lay of land, the old farm also had one other advantage: It came with a house and barn already situated on the property, although both were dilapidated and in desperate need of repair. The house was a real find: a brick Federal period farmhouse dating to 1816. Lyda knew the farmhouse–with its six rooms, six woodburning fireplaces and slate roof–was an antique worth saving

In fact, the farmhouse was so derelict from being unoccupied for nearly 15 years prior to the couple purchasing it, that it would need a major restoration. "It was a disaster on the inside," Lyda says, "But I said, 'Someday I'm going to live in this house.'"

As the couple assessed the situation, they realized that the farmhouse was not only too small to accommodate any visitors that might want to stop by to take in a few holes, but it also wasn't big enough for the large open kitchen and living room they wanted. "So that's when we decided to do a timber-framed addition, Lyda says.

After talking to several architects about adding onto the original house, the couple felt that timber framing would be the best way to maintain the integrity of the Federal period house. Lyda had seen examples of timber framing in some of the country home magazines she had subscribed to over the years. Timber framing seemed like the best option for the addition because of its versatility and ability to fit in with the country-style furnishings she and Jim had collected over the years. The frame would also complement the look of the original house. "Another reason we choose timber framing was because of the simplicity of it," Lyda says. "We felt like we could do whatever we wanted with a timber frame."

Knowing that the restoration of the farmhouse–along with the construction of the golf course–was going to take several years, the couple decided first to restore the barn and turn it into a guest house. Jim and Lyda figured they could live in the barn, supervise the restoration of the farmhouse and watch the erection of the timber frame all while living less than 60 feet away. "Jim and I ended up living there for nearly nine years." Lyda says with a chuckle. "It took us 12 years to get it restored."

It was during the planning stage for the timber frame section of the home that Lyda and Jim found an Amish-owned framing company, called Oakbridge Timber Framing, located not far from them in Howard, Ohio. The couple set up a meeting with Oakbridge, to discuss their plans and find out more about the timber-framed homes Oakbridge builds

The Cooks drove to Oakbridge's offices and discussed their project with their design staff, who showed them some pictures of homes the company had built. When Lyda and Jim came here they saw a house that had an article written about it, says Johnny Miller owner of Oakbridge. "They liked the shape and style of the frame. It ended up being basically the same type of frame that we designed for them."

Home on the Fairway

Not long after meeting with the couple, Oakbridge visited the home site to figure out where and how to attach the addition to the original structure. The original building, which was in the shape of an L, would have to now accommodate a 20-by-42-foot timber frame. The problem was where to attach it. Fortunately, during the restoration of the farmhouse, one room was so dilapidated it had to be demolished, except for its foundation. Jim decided that room would act as a bridge between the new and older parts of the house. Instead of being an L shape, the house would now become U shaped with the timber-framed portion on one leg of the U and Federal-style home on the other leg.

The U shaped had another advantage as well. It would provide for a covered porch protected from any stray golf balls that might fly in its direction. "The main reason for the porch was so that golf balls wouldn't hit the walls," Jim says with a chuckle.

When the design was complete and the frame constructed in Oakbridge's workshop, the finished timbers were stacked and loaded onto a flatbed truck and then driven to the building site. It only took the Amish crew several days to erect the frame. "It was unbelievable to watch," Lyda says. "It was just like a barn raising."

Lyda says. "It was just like a barn raising." The exterior of the frame was covered with insulated panels, a job that took about four days. The whole place was up and weather tight in two weeks, Lyda says. "It was like: Instant house!"

The frame that Oakbridge designed for the couple is a simple one made from solid oak timbers, hewn into shape with hand tools and then coated with a clear penetrating oil. "They didn't want the frame to be ostentatious, or with a lot of extra details," Johnny says. "It is a very basic timber frame."

The most complicated thing about the frame's structure are the king-post trusses that hold up the roof, which reaches 25 feet to the peak. "The whole addition could have been built without any interior posts," Jim says, "but because we had a loft, we simply did a center post in two of the bents in the 20-by42-foot frame."

Jim and Lyda love the way the house has turned out, especially the timber-framed portion where they spend the majority of their time. "Timber framing to me has such a solid look," Lyda says. "It makes the house feel sturdy in winter weather and bad storms. I always feel cozy and secure. Sometimes both my husband and I sit here and think, how did we get so lucky to do this?