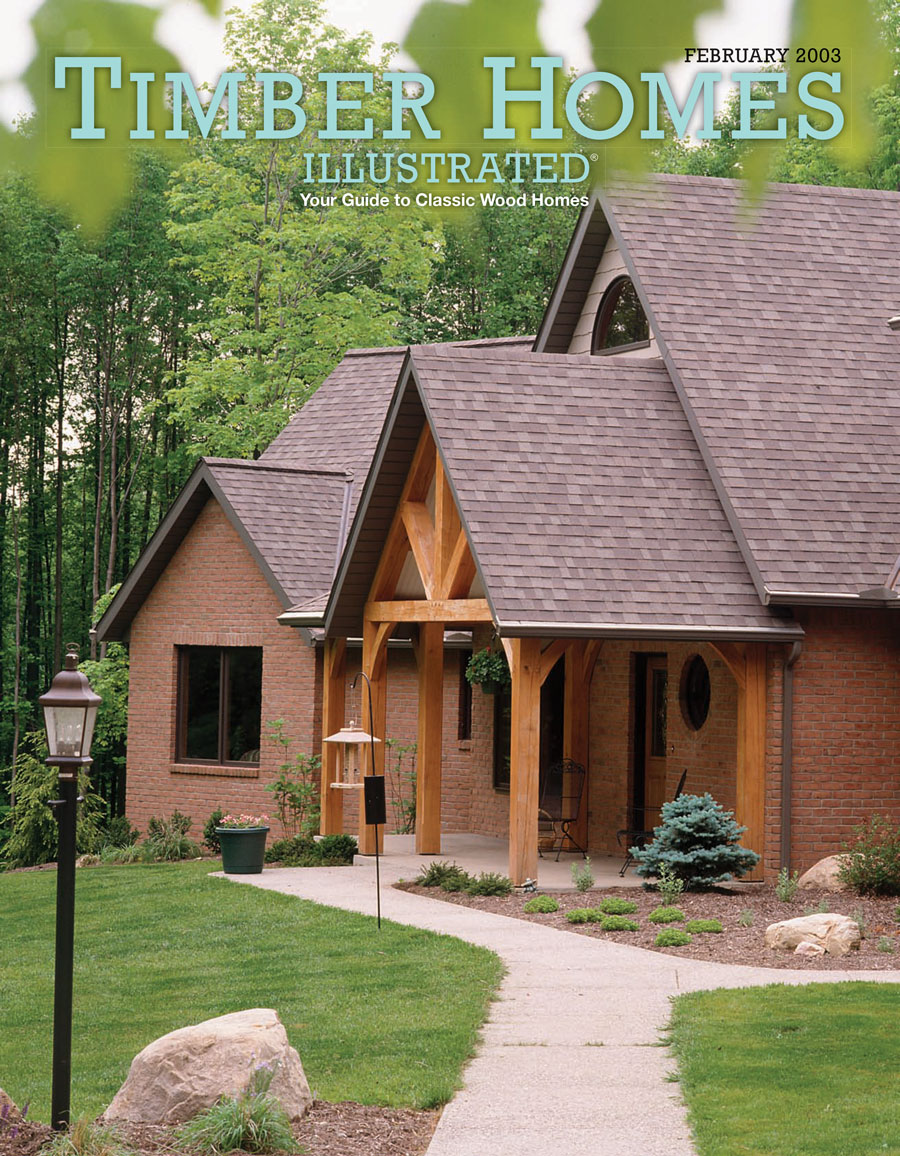 When Greg and Beth Bookwalter were considering a new home, they immediately thought of Greg's office. It was enveloped in timber framing. The entire building, in fact, was distinguished by an intricate maze of wooden posts and beams. It made going to work a pleasant experience for Greg each day

The couple was attracted to timber framing not only for aesthetic appeal, but also for the way it functions in a structure. A timber frame is a self-supporting creation. It's posts and beams, joined by mortises and tenons secured by hickory pegs, are strong enough to support a home's walls, floors and roof system. A frame's strength makes the interior partition walls unnecessary. Though some walls are needed for privacy and to define some rooms (such as bedrooms and bathrooms), many homeowners create large expansive spaces that flow from one room to another, especially in the main living area.

While the combination of timbers and joinery make wall-less rooms possible, a truss system can also create homes with wide-open spaces and vaulted ceilings. Even though many trusses are as beautiful as they are functional, their main purpose is to provide support for the roof (as well as other upper-story structures, such as a loft), enabling some great room ceilings to soar 24 feet or higher.

It was these factors that made timber framing the perfect building choice for the couple, especially Beth, who often uses a wheelchair and walker at home. Her special need for unencumbered movement between rooms would benefit the most from a frame's open floor plan. "We wanted something that would lend itself to open hallways and so forth," Beth says.

Greg and Beth already owned a lot when they made the decision to go with timber framing. Several months before, they had bought 6 acres of undeveloped land they had discovered while driving down a winding country road. "The road isn't very long," Beth says, "but it's scenic. Then we saw the land-for-sale sign," Beth says.

Fortunately for them, the land was still available for purchase. It also lay within the boundaries of the same school system their son was already attending. Knowing no teenager would want to leave his friends and start all over at a new high school, especially with senior year approaching, the couple decided to purchase the property. "That was a major consideration," Beth says.

The couple decided to clear only 3 acres of the home's densely wooded lot. The other 3 acres, they decided, would remain undeveloped, giving them a private wall of brush and native trees.

With the property in place, the couple now had to decide on a timber-frame producer

One company whose ad in a magazine caught Beth's eye was OakBridge Timber Framing in the nearby town of Howard. OakBridge is a company run by a group of Amish craftsmen that create and raise their own frames. They could see that the company's work was first-rate and engineered to exacting measurements. OakBridge showed the couple several designs, models and pictures of homes that the company had recently built. "We chose one that we liked and modified it to suit our needs," Beth says. "OakBridge drew up what we wanted, and then we went from there."

Since OakBridge would primarily be raising the frame and leaving the general contracting of the home to someone else, the couple needed to find a competent general contractor to complete the home. After some searching, Greg and Beth found Sonny Lexington. Not only was he local, but he had also worked with OakBridge before. When they got the chance, Greg and Beth visited one of the homes that Sonny had finished for OakBridge, a fully timber framed home. "After seeing that home, we knew he could do the work on our house," Beth says.

While the Bookwalter's home isn't fully framed, the combination of trusses and framing in the most visible parts of the home—the great room, kitchen, dining room and loft—gives the impression that it is. Three massive trusses tower over the great room. The trusses are combined with purlins, the short horizontal pieces seen in the room's ceiling structure. "The trusses are hybrids," Johnny says, "combining a traditional hammerbeam truss with kingpost struts at the peak. It's very popular among our customers."

The kitchen, dining and loft areas feature traditional post-and-beam construction combined with a common rafter system in their ceilings. "With," Johnny adds, "a collar tie in every other one."

OakBridge, which primarily builds its frames using northern-grown solid oak timbers, coated each of the timbers in woodpenetrating oil since the couple wanted to lightly color their frame.

Greg and Beth's home is everything that they could have hoped for. The timber frame has accommodated Beth's need for wider doors, hallways and closets, all which sport 4-to-5-foot doorways. "In the kitchen, we designed it so that the appliances are a little higher so that Beth could get to them.

In fact, they were amazed at how easily the house came together. Th e timber framing part seemed easy to me," Beth says. "It was like watching a Lincoln Logs set being put together." That ease, she believes, resulted from hiring a builder who worked with their timber framer before. It's an arrangement she recommends everyone consider as they plan their homes.