A Timber-Frame Pavilion Crafted in the Amish Tradition 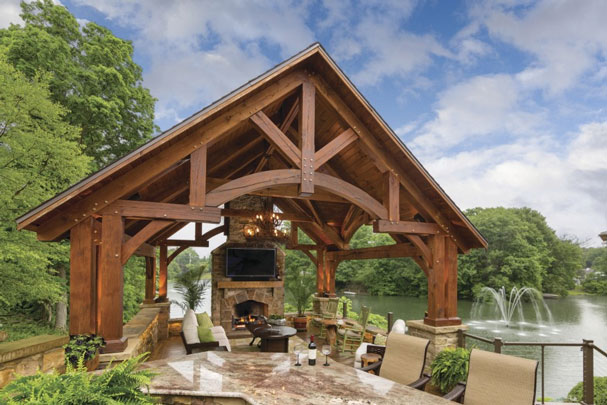 Dozens of tough hickory pegs pin together the mortise-and-tenon joints used in the construction of this 18-foot-by-19-foot timber-frame pavilion, located on Lake McClintock in Lima, Ohio. But hidden in the white-oak frame is a single peg made of purpleheart (a tough, colorful hardwood also known as amaranth).

Typically inscribed with the name of a cancer survivor or someone with particular significance to the family, we call this the frame's "giving peg." Every frame that our company builds includes one of these giving pegs as a reminder to everyone involved on the project to give back to the community. Tradition, faith, family, community, and sustainability are core principles in our family-owned business and in the Amish community of Loudonville, Ohio, where we live and work.

I raised my first timber frame with my dad in 1986, and I've specialized in traditional timber-frame construction ever since. Most of our projects are custom homes, where the frame is handcrafted in our woodshop, then loaded onto a flatbed trailer and trucked to the jobsite. But we occasionally build pergolas and other outdoor structures too, including the timber-frame pavilion featured in this article, using the same traditional timber-frame techniques.

Crafted in the Woodshop

Like 70% to 80% of our projects, this frame was crafted from white oak, a locally sourced, weather-resistant species. In the woodshop, our workers rely both on hand tools—like hammers and razor-sharp chisels—and on pneumatically powered machinery to create these frames. The goal is to make the tightest joints possible, so that the frame will still look good long after we've left the job.

Toward that end, one technique that we've learned over the years is to cut the tenon shoulders at 90.5 degrees instead of 90 degrees from the face, to compensate for the slight rounding of the timber that occurs as it ages (the rounding is caused by the surface of the timber drying out more quickly than the center).

In addition, unlike most timber framers, we use the "draw bore" technique when creating pegged mortise-and-tenon joints, offsetting the peg hole in the mortise and the peg hole in the tenon by about 1⁄8 inch. When the joint is assembled, the two holes are still slightly offset. Driving a strong hickory peg (stronger than oak) through the hole creates tremendous pulling power that draws the joint tightly together, even after the pieces dry out and shrink a bit. The technique is a must for tight-fitting joints.

Once we've completed the joinery, we brush on a temporary water-based finish that lasts about eight months, plenty of time to protect the wood from the elements while we close in the frame once it's been assembled on site. Then we pack all the pieces up, load the frame onto a flatbed trailer, and truck it to the site.

Typically, we send a small crew of three or four workers to the site along with the frame to prep it for raising. The next day, in what is truly a community event, most of our workers gather together with family and friends to assemble and raise the frame.

Later (if it's a home), a separate OakBridge panel crew covers the frame with SIPs (structural insulated panels), after which a local contractor oversees the finish work. On this project, a local team took over after we had completed our work, installing a tongue-and-groove white-pine roof deck and overseeing the extensive masonry work that helps anchor the pavilion to the site.

Like the joinery, timber-frame terminology—king and queen posts, bents and girts, summer beams, purlins, and (yes) relishes—is steeped in tradition. But even after the more than 33 years we've been in business, our three generations of workers continue to learn new things about wood and about the woodworking business. We rely on the power of the Internet to connect with customers and sell our frames all around the country. Many of our projects are architect and builder referrals, but sometimes customers—like these—find our company online, starting us off again on another adventure.